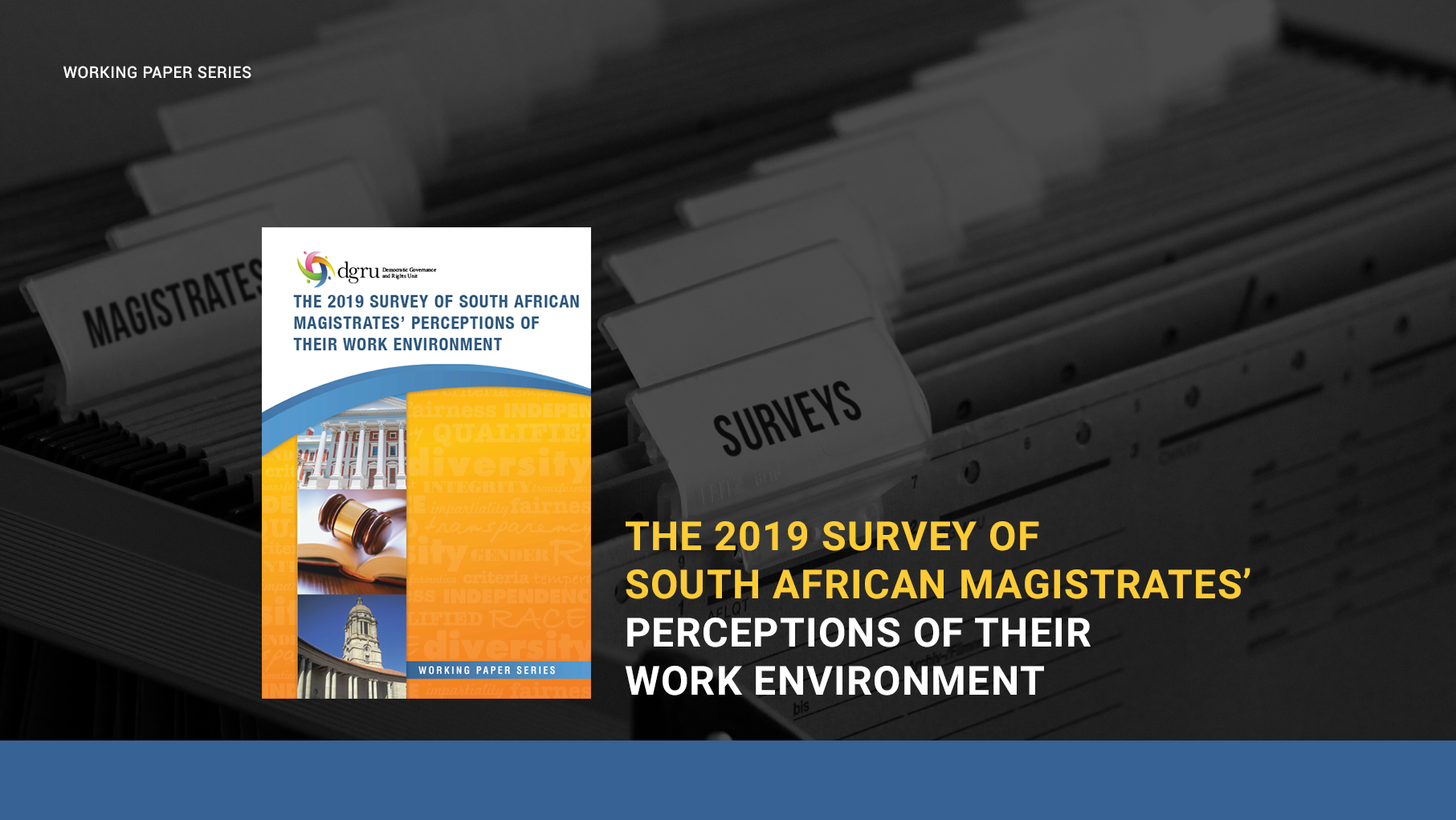 Magistrates Matter, in conjunction with the Democratic Governance and Rights Unit’s (DGRU) are proud to present our paper on a 2019 survey of South African magistrates’ perceptions of their work environment.

“Nearly two decades later, government officials still express unification as their goal for the judiciary, but progress beyond discussions appears disjointed and preliminary at best.”

Although the magistracy remains formally separate from the superior court judiciary, it generally does the same work as the judiciary. For many South Africans, the magistracy is the only judiciary they will ever encounter. Magistrate’s courts hear an estimated ninety-five percent of cases in South Africa (Morné Olivier, 2014). The Constitutional Court has acknowledged that magistrate’s courts are a “vital part of the Judiciary and the administration of justice” (Association of Regional Magistrates of Southern Africa v. President of the Republic of South Africa, 2013)

“For many South Africans, the magistracy is the only judiciary they will ever encounter.”

The importance of the Magistracy

Magistrates have increasingly been called on to act and be appointed as judges. The increasing numbers of former magistrates who have become judges do not appear coincidental. Magistrates now form a pool of candidates from which judges are appointed, which was not the case in the pre-constitutional era.

Given the importance of the magistracy in providing access to justice, as well as their increasing role as providing judges of the high court, we wanted to survey magistrates in order to understand their own perception of their role, and highlight the challenges they are experiencing.

Additionally, the DGRU was concerned about the results of the 2018 Afrobarometer public opinion survey which recorded that 45% of South Africans have little or no trust in the courts. This survey forms part of a broader research agenda in which we are unpacking this finding further.

Magistrates’ perceptions of their work environment

The survey was designed to request sitting South African Magistrates to complete a brief online questionnaire regarding their workload and pressures, the broader court environment, as well as their personal career trajectories. With the generous assistance and cooperation of the Association of Regional Magistrates of Southern Africa (ARMSA) and the Judicial Officers Association of South Africa (JOASA) who helped to disseminate the questionnaire, the online survey was conducted from 20 September to 18 October 2019. The survey responses were then analysed by members of the DGRU. A first draft of the report was then shared with a group of magistrates and discussed in a virtual meeting during July 2020. Participants’ responses and feedback have been included in our analysis in this report.

This survey was made possible due to the generous support of the Open Society Foundation and the Social Justice Initiative.