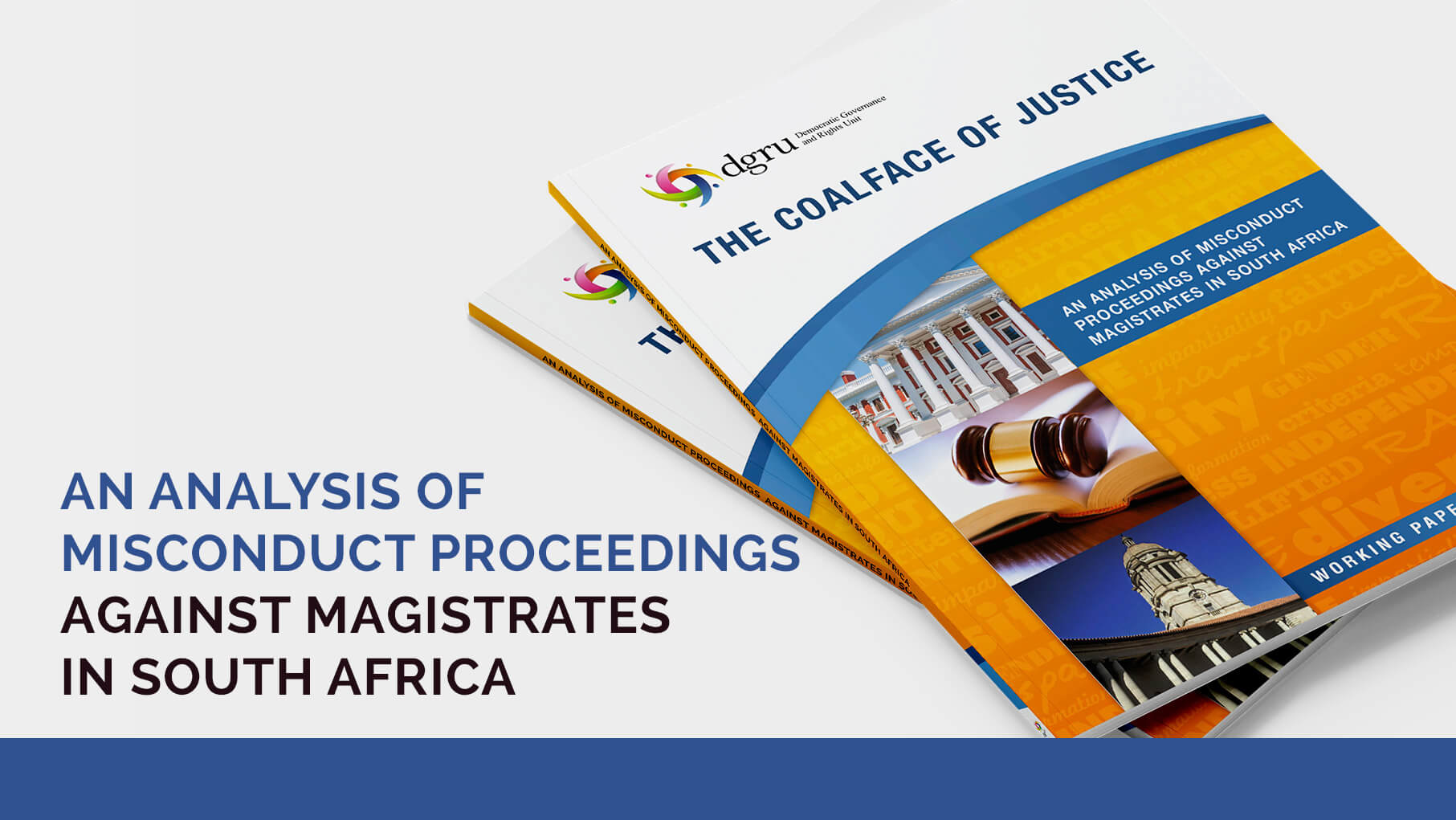 The most recent Afrobarometer survey (2018) indicates that 32% of citizens say that most or all magistrates and judges are corrupt. A further 47% of South Africans say that some magistrates and judges are corrupt. Moreover, 47% of citizens surveyed have no or little trust in magistrates.
Today, concerns around corruption in the judiciary are rising. The question is, is this applicable to the Magisterial system? Are the concerns valid and is this perception based on empirical findings or hearsay?

Why do Magistrates Matter?

In the words of former Chief Justice of South Africa, Ismail Mohamed:

“it is in the Magistrates’ Courts that justice is tested in its most crucial, most pervasive, most voluminous, most pressurized, and logistically most demanding dimensions – in literally thousands of cases every day…the continuous struggle for the legitimacy and the efficacy of the instruments of justice is substantially lost or won in the Magistrates Court”.

It is therefore important that South African citizens engage with the issues relating to the magistracy in order to promote the independence, accountability and the efficacy of the judicial system.

“…the continuous struggle for the legitimacy and the efficacy of the instruments of justice is substantially lost or won in the Magistrates Court.” – former Chief Justice of South Africa, Ismail Mohamed

The Coalface of Justice 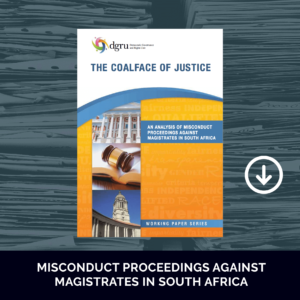 The role of Magistrates

The Magistrates Commission oversees the appointment, suspension, and removal of magistrates, amongst other things.

By law, a magistrate can only be removed from office prior to retirement age for reasons of misconduct, continuous ill health, or incapacity.

Allegations of misconduct, continuous ill health and incapacity must be reported to the Magistrates Commission, who in turn will conduct investigations. A finding may then be made that the magistrate should be formally charged, whereupon the magistrate will be subjected to an inquiry. If the magistrate is found guilty, the inquiry may recommend that they be removed from office, or that a lesser sanction be imposed. If a recommendation for removal is made, and the Magistrates Commission agrees, the matter is referred to Parliament, which makes the final decision on whether to remove the magistrate from office. The Minister may provisionally suspend a magistrate while the investigation are ongoing, and it is also possible for a magistrate’s pay to be reduced or suspended during the process.

By law, a magistrate can only be removed from of office prior to retirement age only for reasons of misconduct, continuous ill health or incapacity.

These are the results:

* 15% (6 cases) of misconduct charges led to a criminal offense (e.g. tampering with evidence, using false matric scores etc.).
* 72% (28 of the 39 cases) were misconduct charges with no criminal offense involved.
These included, among others, attempts to allocate a case to a particular magistrate, and the use of abusive or derogatory language.
* In 30% of the cases, the Magistrates Commission found that the magistrate(s) in question did not conduct themselves appropriately.
* 17% (9 cases) resulted in the magistrate being charged with misconduct.
* In only 2 cases (5%) are magistrates being accused of poor work performance.
* Only 5% of cases were brought against individuals in leadership positions (3% Chief Magistrates, 2% Regional Court President).
* In 62% (31 cases) these charges included counts of misconduct, that also amounted to a criminal offense. Charges in this category range from drunken driving, to fraud, theft, defeating the ends of justice, and murder.
* 24% of cases charges did not amount to criminal offenses.
* In 73% of all cases considered by parliament, the magistrate in question was provisionally suspended.
* In 36% of all cases, the case was closed because the accused magistrate decided to resign.
* Overall, 86% of cases were referred to parliament and included some form of misconduct charges.

In terms of time lapsed between the opening and closing of a case:
* In 70% of the cases, where ‘guidance, sensitization, cautioning, or directions’ were deemed necessary, the case took more than six months to resolve.
* 42% of cases in this category took more than a year to resolve.
* 88% of cases filed in 2018 were still outstanding as of June 2019.

To put these numbers into perspective, of the total 129 cases opened against magistrates in 2015, only 8 were charged with misconduct, while a further 7 received Directions/Sensitization.

Similarly, of the 84 cases that were opened between 2016 and 2018, so far only two magistrates were charged with misconduct, while one received Directions/Sensitization.

Whilst the majority of cases were resolved within a year of the complaint, several factors were identified which contribute to serious delays in the process. Notably:
– the bringing of interlocutory applications,
– applications for postponement,
– taking proceedings on judicial review, and
– delays in the process once matters were being considered by Parliament.

In light of the above, the report made six core recommendations, including;
1. the need for improved case flow management and record keeping;
2. the need for greater transparency and publicity regarding the work of the Magistrates Commission;
3. the possibility of introducing prescribed timelines
4. changing the pool from which presiding investigating offices are drawn;
5. possible law reform initiatives to create a legal framework for dealing with misconduct complaints and
6. procedures for dealing with misconduct to consider the impact of infrastructural problems on perceptions of corruption.

These were addressed as follows:
1 and 5: Case flow management and record keeping outdated and cumbersome
Aside from the practical need to digitize paperwork systematically, there may also be a need for a law reform initiative to develop a holistic legal framework for dealing with all aspects of the process, so as to limit the potential for review applications to delay an ongoing process.

2 and 6. Lack of transparency re process and commission findings
The commission recommended the MC take steps, including outreach initiatives, to increase transparency and awareness of the processes of laying complaints about conduct issues, and to publicize the results of the outcomes of these complaints.

At the time of publication, it is our understanding that the MC is planning to release quarterly reports.

4. An over-burdened Magistracy
To address concerns about presiding and investigating officials being over-burdened, the commission recommended the use of retired judicial officers being used to support the existing structures. To utilize their extensive experience and knowledge of the law – and keep it within the judicial system. The advantage being, that without the demands on their time, faced by active judicial officers, their support would speed up the process and diminish delays.

At the time of publication, it is our understanding that the MC is exploring such an initiative.

5.The legal framework is problematic
On paper, it appears as though the process for lodging complaints against magistrates is set out in regulations promulgated in terms of section 6A of the Magistrates Act. However, we have been advised that the regulations are not being implemented and applied in practice, as no recommendations were made by the Magistrates Commission, as required by the enabling legislation.
In such circumstances, the complaints procedure regulations have effectively not been put into operation and are not being utilised in practice.

This needs to be rectified as a matter of urgency. There is a lack of certainty as to the applicable legal framework to be applied, which is contrary to the rule of law.