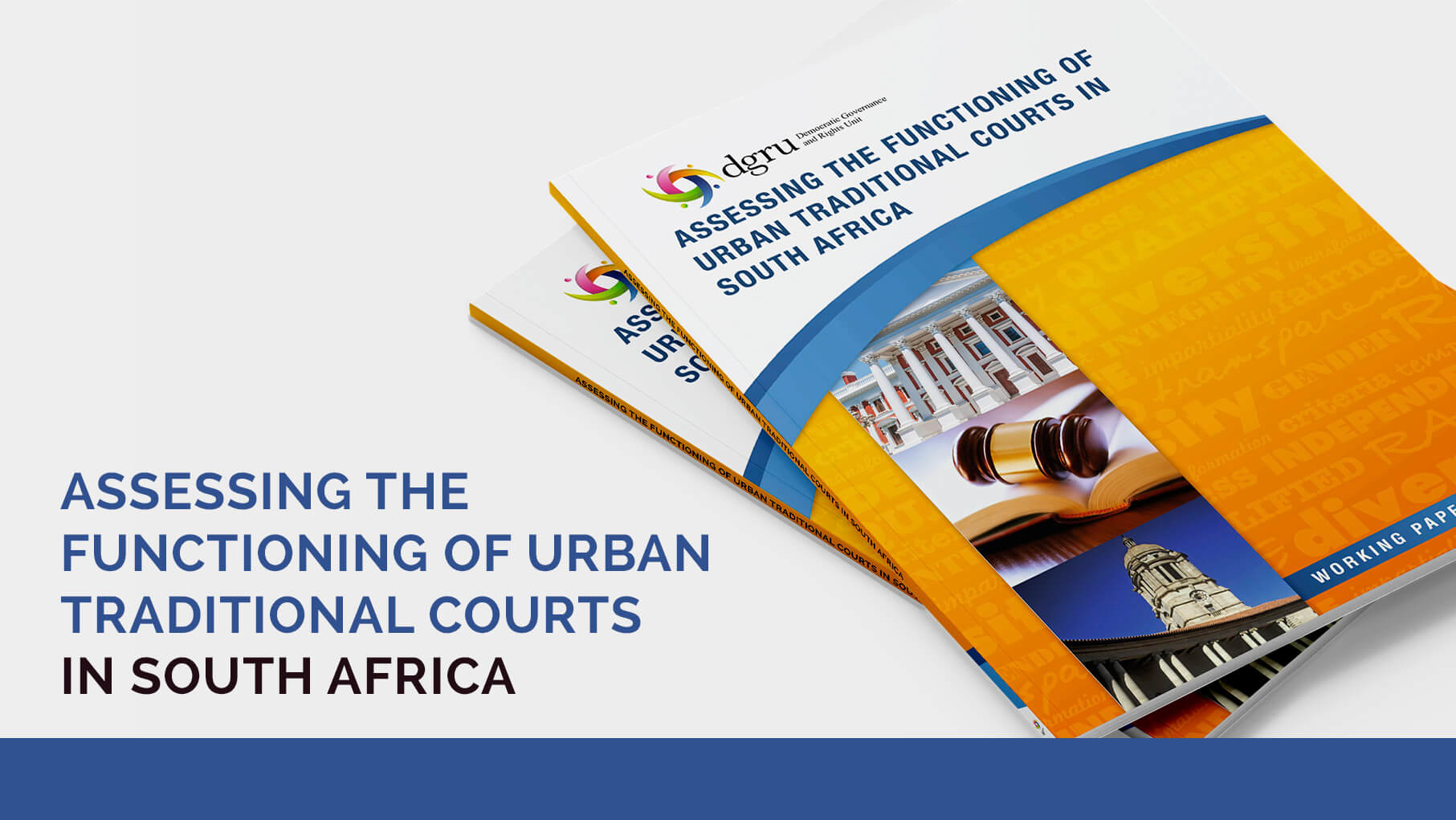 Assessing the functioning of Urban Traditional Courts in South Africa.

In their third paper, the DGRU as part of a bigger project on judicial corruption and administration, and with the intention of gaining a better understanding of the state of corruption in the lower courts, assessed the functioning of Urban Traditional Courts in South Africa.

Formerly known as chief’s courts, traditional courts are designed to deal with customary issues in terms of customary law. In such cases, the chief and his headmen decide cases brought before them by parties within the area of jurisdiction, using indigenous law and custom.

Formerly known as chief’s courts, traditional courts are designed to deal with customary issues in terms of customary law.

Given that traditional (chief ’s) courts have jurisdiction to hear certain matters at the level of magistrate’s courts, traditional courts were included within the broader project research.

It is important to note, that the traditional courts are by and large still regulated by traditionalism – and considered to be outdated and inappropriate. A Traditional Courts Bill was tabled before parliament in 2008 with the intention of regulating the structure and functioning of traditional courts. However, the Bill in its various forms has been met with strong public opposition.

Opposition has generally focused on the fact that the Bill will legalise and entrench current discrimination against women, and in effect creates a separate legal system for 17 million people. 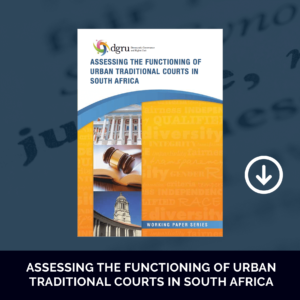 Jurisdiction of the Traditional Courts

Whilst the DGRU did not manage to conclude a perception survey of the traditional court users as intended; the insights gained were nonetheless valuable.

Traditional courts have been in townships since the 1980s. They are overseen by the traditional chiefs and their respective headsmen, whether 4 or 16, who assist and preside over the cases with the chiefs.

It is their belief, that this structure, by its very nature, precludes them from corruption, as the more persons that preside over a case, the lesser the risk of corruption.

Traditional courts have been in townships since the 1980s. They are overseen by the traditional chiefs and their respective headsmen, whether 4 or 16, who assist and preside over the cases with the chiefs.”

i) Lack of statutory regulation
While no obvious corruption was observed, the system itself remains vulnerable to potential corruption and other abuses. A satisfactory statutory framework is required, to ensure norms and standards across the board can be applied, balanced with the different traditions and customs practiced around South Africa.

Particular areas of concern include:

(a) The lack of legal training could allow for cases to be decided incorrectly most especially as it relates to theft and debt.

(c) The court receives and keeps monies due to complainants until the total debt is paid. There is no bank account that this is put into.

ii) Gender
Both traditional courts chiefs and the advisory councils of headmen were composed entirely of men. Whilst this is understandable given the history and nature of customary law it is incompatible with the transformation imperatives of the Constitution and the status and function of the traditional courts within the broader justice system.

iii) The dress code required by the court is also incompatible with gender equality, in that women are not allowed to wear trousers and must have their heads covered. Given the fact that the Traditional Courts Bill speaks to the need to achieve equality and promote non-sexism, this practice will need to be reconsidered once the Bill is passed.

iv) Training
It is our understanding that the South African Judicial Education Institute (SAJEI) has been offering training to traditional leaders in their adjudicative roles. However, from the observation at the Mamelodi traditional court it does not appear that such training is having the necessary impact on traditional courts.

Decisions and judgments are made purely on the basis of corporate opinion, which again leaves the court proceedings and judgments vulnerable to misuse.

The lack of statutory regulation of traditional courts could allow for a range of abuses and malpractices, bringing these important forums into disrepute.”

The main goal of this formal legal training would be to align traditional courts with the values entrenched in the constitution by mentoring and training traditional leaders to give decisions that are in line with the constitution. Furthermore, it would enable the court to adequately caution against conduct by the parties that would lead to dire consequences should such cases be referred to the Magistrates’ Court.

Traditional courts play a pivotal role in dispute resolution. The focus of the formal legal training would be on mediation to enhance the chiefs’ and the headman’s mediation skills.

The focus would also have to be on the National Credit Act and the way magistrates deal with outstanding debt related matters (section 65 cases).

The principles of restorative justice observed are to be commended. Given the adversarial nature of the formal justice system… the traditional courts have an important role to play.”

The principles of restorative justice observed are to be commended, especially in matters that were not purely customary in nature. Given the adversarial nature of the formal justice system and the long delays in achieving results, the traditional courts have an important role to play especially regarding theft and the like.

Magistrates who will interview in the April 2021 JSC interviews