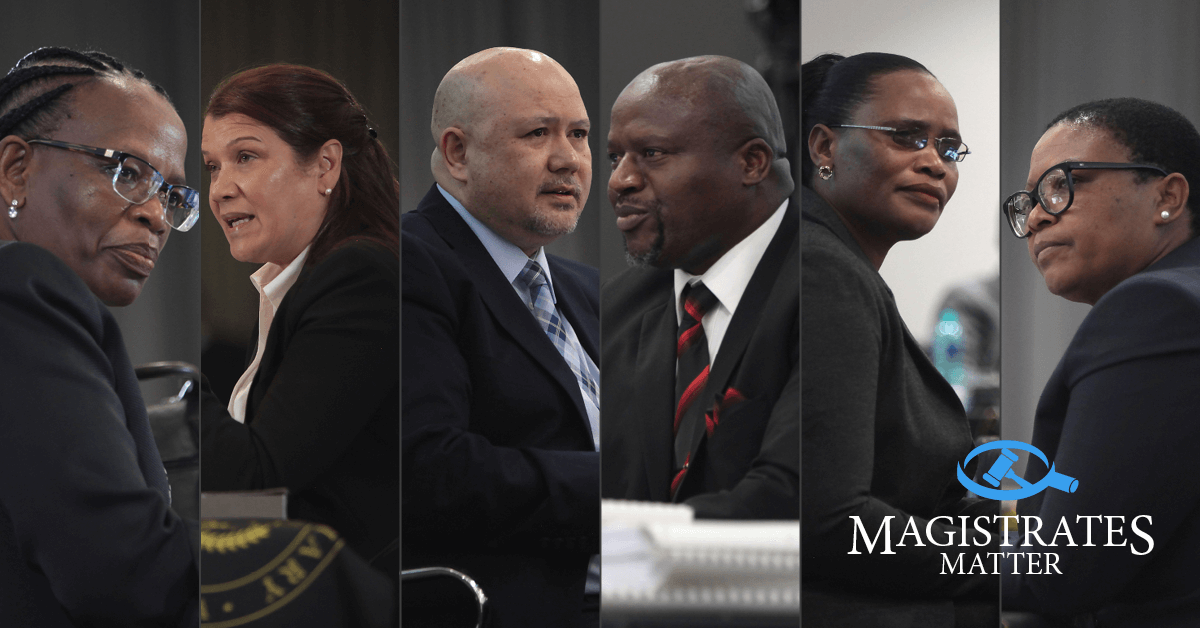 Following the April 2021 interviews and the recommendations of the JSC, President Ramaphosa has appointed 28 judges to South Africa’s courts. Of these 28, eight were magistrates that have risen or are rising through the ranks. We take a closer look at these current and former magistrates nominated for advancement.

IN THE SUPREME COURT OF APPEAL

There have been relatively few of the SCA’s current or former judges who have made the transition from magistrate to high court judge, to SCA judge. Of the currently sitting SCA judges, only Justice Baratang ‘Connie’ Mocumie (appointed 2016) and Justice Fikile Mokgohloa (appointed 2019). were formerly magistrates. And now, after the April 2021 round of interviews, a third, Judge Zeenat Carelse will take a seat on the SCA.

Judge Zeenat Carelse
Judge Carelse began her career as a public prosecutor (1994-1998) before joining the magistracy. From 1998-2004 she rose through the ranks, from magistrate to district magistrate, to senior magistrate in Johannesburg and Cape Town – and later regional magistrate in Tembisa for four years.

She was appointed to the Gauteng High Court in 2009. Her permanent appointment to the SCA followed considerable acting stints at both the Supreme Court of Appeals and the Land Claims Court.

According to her application form, Carelse considers one of her most significant contributions to the law and pursuit of justice in South Africa to be her decision in 2013 Gauteng High Court matter of Nono Cynthia Mañana v Presiding Officer of the Children’s Court, Krugersdorp & Others.

Carelse submitted that this judgment was “ground-breaking” in that it solved one of the challenges preventing grandparents from accessing foster care grants for their grandchildren and “strengthened the legal status” of orphans.

The judge has shown herself strong on people convicted of rape and gender-based violence in judgments like S v Khanye and housing rights and eviction cases where municipalities have not fulfilled their obligations, including to provide alternative temporary accommodation for occupiers required to be evicted from buildings (Mpume v Drakenstein Municipality & Another).

Of the four former magistrates, only Judge Violet Semenya was successful in her application, nominated for the position of Deputy Judge President: Limpopo.

Appointed in 2017, Judge Matsaro Violet Semenya was at the time, the “newest” member of the Limpopo High Court bench – and the only woman.

During one of these stints, Semenya presided over Thobejane v Premier of the Limpopo Province, a case concerning traditional leadership disputes. The Thobejane’s sought to set aside the Premier’s decision not to recognise them as traditional leaders. In response, the Premier raised a preliminary point of non-joinder (not citing the relevant people in the case). Semenya first dismissed the point of non-joinder and proceeded to hear the merits of the case. But in a bizarre twist, in her written judgment, she reversed the initial dismissal and upheld the point of nonjoinder – dismissing the Thobejane’s case in its entirety. Realising her error, Semenya granted the Thobejane’s leave (permission) to appeal to the Supreme Court of Appeal. The SCA did not take kindly to her error and swiftly overturned her judgment.

MAGISTRATES ELEVATED TO THE HIGH COURT

In the April 2021 round of interviews, nine current and former magistrates put their names forward for appointment to the high courts. Of these, six were successful.

Mashudu Munzhelele
Ms Mashudu Munzhelele is not one to be underestimated. A lady accustomed to defying the odds, she has been confined to a wheelchair from a young age, powering her way through law school on sheer grit and determination.

On her journey to the high court, whilst still studying, she identified a skills gap among law graduate students and initiated a moot court that was ultimately incorporated into the law curriculum as a module at the University of Venda. She identified the need for a Shona interpreter at the Sibasa Regional Court and motivated for the appointment of one. She also identified the lack of law and consequences knowledge among secondary and primary school learners and introduced an outreach for same around Thohoyandou in Vhembe District.

She started her legal career as a candidate attorney, later becoming a district and regional prosecutor. She served as a district magistrate as of 2006 and has for the past seven years served as regional magistrate in Sibasa. Although based in Limpopo, Ms Munzhelele has, since 2017, held several acting stints in Gauteng.

In P and another v S, where the appellant had not been informed of the applicability of the Criminal Law Amendment Act, then Acting Judge Munzhelele ( with Janse van Nieuwenhuizen J and Cambanis AJ concurring) upheld the appeal stating that “[t]o be informed about such a patently serious matter at the end of a trial as it happened in this case, defeats the very purpose envisaged by s 35(3) of the Constitution. Put simply, such would be a trial by ambush which is neither desirable nor permissible in a constitutional democracy underpinned by a Bill of Rights.” (paragraph 32). Ms Munzhelele has contributed to other notable judgments while appointed as an acting judge.

Andre Henry Peterson
In a legal career spanning nearly 30 years, Mr Andre Henry Peterson has slowly climbed the ranks of the magistrates’ courts. While completing part-time studies, he worked as an administration clerk in the Justice Department. Rising to public prosecutor in 1995, magistrate in 2000, and regional magistrate from 2010. Since 2015, he has held several acting stints as a judge, in both the high courts in Gauteng and North West. After a fairly uneventful interview he was successfully nominated for appointment to the North West Bench.

Many of the cases in this province relate to mining concessions and the rights of rural communities, the majority of whom live with traditional authorities. During Peterson’s interview, ANC member of the National Council of Provinces, Thamsanqa Dodovu, pressed Petersen on his knowledge of customary law and statutes which govern traditional councils and the rights of rural communities. While he came up short on direct knowledge, Petersen assured the commission that his job was to “locate the law” and to research such matters “to make sure that we will give to the community a fair hearing” when such matters appeared before him.

Takalani Ratshibvumo
Mr Takalani Vincent Ratshibvumo started his legal career in 1996, as a lecturer at the University of Venda. Passionate about helping the community through the law, he continued on to become a public prosecutor. As a student, he volunteered his legal services, giving legal advice to the poor community in and around Thohoyandou in Limpopo.

He joined the magistracy in 2000, rising to the rank of regional magistrate in 2009. He was first appointed as an acting judge in 2013 in the North and South Gauteng High Courts and Mpumulanga. Ratshibvumo is well-known as an activist in legal circles – a streak he has carried from his student days. He is the contributing editor to the SAJEI Newsletter, primarily aimed at magistrates in the district and regional courts.

Lindiwe Vukeya
Ms Lindiwe Vukeya started her career in the legal profession in 1990 as a messenger at an attorneys’ firm before becoming a candidate attorney in the same firm. She spent four years as a public prosecutor before joining the magistracy as an additional magistrate in 2003. From there, she rose through the magisterial ranks eventually becoming head of court, and in 2015 regional magistrate.

Passionate about empowerment, Ms Vukeya has been actively involved in extensive training of other magistrates through the Family Law Forum and the Provincial Child Justice Forum. Her expertise in criminal law stems from her long career engaging with the criminal justice system as a prosecutor and as a magistrate.

One of her significant contributions to law and justice in South Africa is her work in the Barberton Sub-Cluster Re-Demarcation Committee, for which she was appointed as its Chair. She collected evidence from the communities affected by boundaries proclaimed before 1994 and prepared a report that shed light on the Re-Demarcation Board to enable them to facilitate the re-demarcation process.

Since 2016, Ms Vukeya has held several stints as an acting judge in the Gauteng and Mpumalanga High Court, where she has now been permanently appointed.

Read her full bio here
See her April 2021 interview below