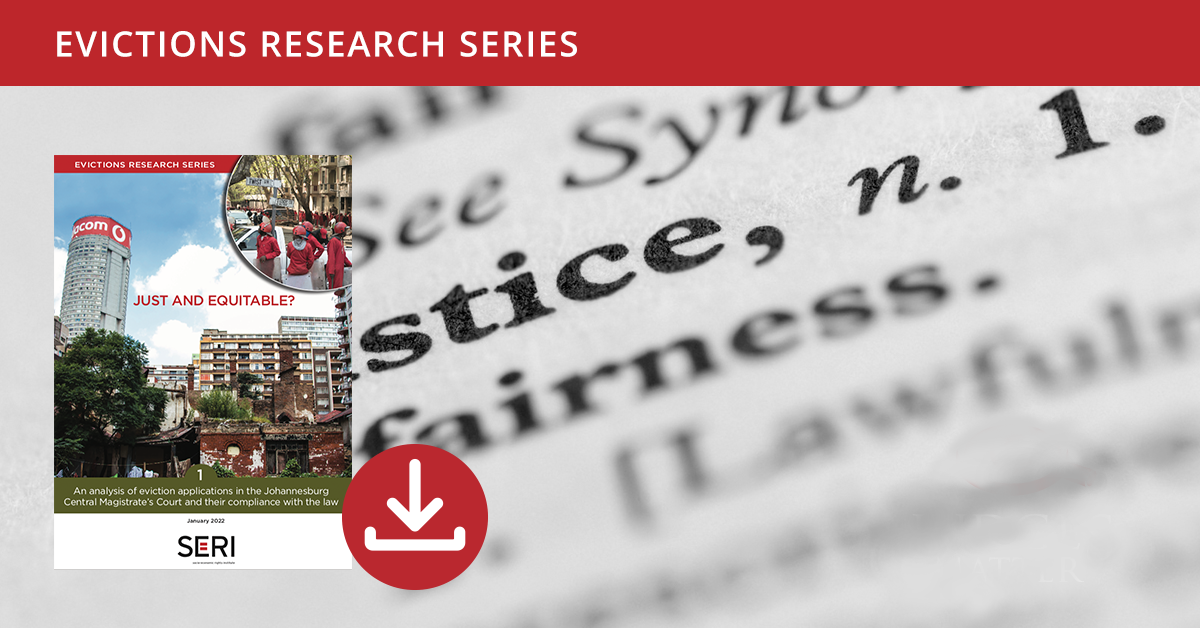 On Wednesday, 23 March 2022, the Socio-Economic Rights Institute of South Africa (SERI) launched the first of several research reports in the Evictions Research Series.

The Eviction Research Series is concerned with the way in which the courts have adjudicated eviction cases. It aims to assess the courts’ compliance with relevant legislation and case law. In addition, the series maps the spatial distribution of evictions, to highlight any areas that face particular vulnerability.

The ‘Just and Equitable?’ report was launched at an online event attended by over 60 participants, including magistrates, judges, court officials, housing and property practitioners, government officials, civil society activists, and students.

SERI Executive Director, Nomzamo Zondo, set the scene by explaining that the motivation behind the Eviction Research Series was to investigate the implementation of the law on evictions, assess people’s enjoyment of the protection against arbitrary eviction, and identify areas that need improvement.

SERI researchers Yvonne Erasmus and Nerishka Singh presented the highlights from the Just and Equitable?’ report, including the legal framework for evictions, and the methodology they used to identify and study over 49 eviction cases from the Johannesburg Central Magistrates Court and the Johannesburg Sheriff. They highlighted that in a whopping 94% of cases the magistrates had not inquired into the personal circumstances of the people being evicted, which is a breach of legal requirements. They recommended that magistrates be provided with training support for them to effectively implement the law.

…in a whopping 94% of cases the magistrates had not inquired into the personal circumstances of the people being evicted, which is a breach of legal requirement.

The research presentation was followed by a panel discussion, where Erasmus and Singh were joined by activist Siyabonga Mahlangu, the general secretary of the Inner-City Federation, and Mbekezeli Benjamin of Magistrates Matter. The discussion was facilitated by SERI’s research and Advocacy Director, Lauren Royston.

Mbekezeli Benjamin highlighted that the Just and Equitable? report filled an important gap in research into the magistracy of the lower courts judiciary. He highlighted that due to a lack of research attention in this area, we are largely left in the dark, on the challenges people face in the system.

Benjamin also added that some of the findings from the Just and Equitable? report complimented the findings from the Magistrates Perceptions Survey Report, in which Magistrates Matter worked alongside the Democratic Governance and Rights Unit (DGRU), to survey +165 magistrates across South Africa, to gain insights into their working environment. In the Perceptions Report, less than half (43%) of respondents said that judicial training was adequate. Six out of 10 magistrates also indicated that high-stress levels, associated with a heavy workload, affected their ability to do their work. Which may go some way to explaining why in the Just and Equitable? report there were such high levels of non-compliance with the law. Underscoring why current training programs require such urgent attention and improvement.

Siya Mahlangu shared the frustration of ordinary court users who found that the magistrate courts did not provide the justice sought, and why so many had decided to resort to the High Court to obtain justice.

This reality, Royston explained, was part of the reason why the second installment of the Evictions Research Series focuses on the Johannesburg High Court, and how it implements the law in eviction cases. A date for the launch of that report will be confirmed in due course.

Read a GroundUp news report of the launch event:

Watch a recording of the launch event